Seen only in the 1998 Lost In Space feature film, (which currently sits at a very disheartening  29% on RottenTomatoes), there is surprisingly very little in terms of resources, photos, and anything else on the design and construction of the Robinson family’s “robot”. I have spent many nights scouring the depths of the web in search for quality photos and other details but it always turns out fruitless; I can only hope this post will aid someone else seeking out resources on the robot’s design, prop and overall production for the feature film.

Voiced by the late Dick Tufeld (1926–2012) in both the original television series and the more recent film, the Rambler-Crane Series Robot is sometimes referred to “B9”. It was completely re-designed for the feature film remake in 1997.

The Robot is seen in two incarnations during the course of the film; the fully-loaded Robot you see here is destroyed in a last stand protecting the Jupiter 2 crew from carnivorous spider-like creatures on the Proteus and another when Will Robinson then rebuilds the Robot using spare parts, which ends up harking back to the classic B9 design from the original series. Will utilizes a backup of the Robot’s memory and injects some of his own personality to bring Robot back to life.

After searching the depths of the internet, I have only come across a few resources for more information on the development of the robot. The first source comes from Micromagic Systems, who create robots and animatronics for use in films. They were one of the teams to build the two completely functional “B9’s” used on screen and provide a fairly descriptive write up of the cumbersome process. They were built in 1997 by Jim Henson’s Creature Shop.

Here’s an excerpt from their write up:

“B9 was a beautiful piece of engineering once complete. Being primarily hydraulic, B9 moved virtually silent, could apply 1 ton of force between its fists, and with a 1000W 24V motor in each track it could get up to a fair speed. When (one) stood next to B9 it had a real presence, which I feel was completely lost in the movie. However, if you read most reviews of the movie it was not the only detail lost!”

You can check out all the information over at Micromagic.

A second source is simply a single photo (pictured below) that comes from FlintLockPrivateer over on DeviantArt. It looks this particular robot was not one of the animatronic bots used on-screen and instead was just a (seemingly) expensive promotional tool for display and marketing the film’s release. 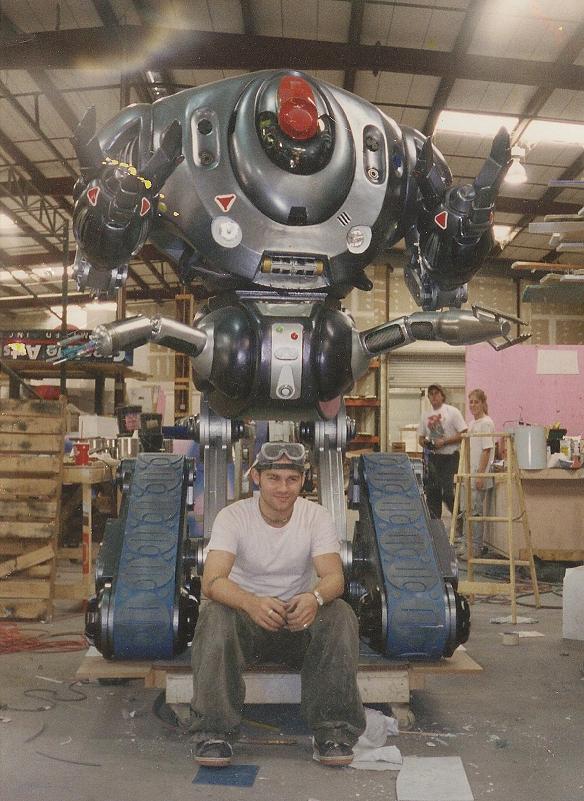 The following description is all that is provided:

“9 foot tall animatronic robot I sculpted while working with a company called Creative Arts in 1998. It was made for FAO Schwartz, New York for a visual merchandising display. Polystyrene and urethane foam with a steel frame.”

All other sources found of the robot are either photos of the toys or models that came out with the film’s release, and there is an unusually small number of works based upon this particular design as well, of course overshadowed by the original Lost In Space robot design.

Regardless of the stunning lack of information, I have collected as many shots of the Robot’s best moments from the film, as well as hand-selected some of the other best source material for anyone else that may share the love of this particular design.

If you have any more information or photos on this design, please get in touch or share!

5 thoughts on ““Danger, Will Robinson!””